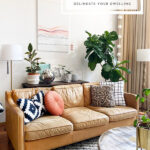 INSIDE : Learn the reasons why you need a Disco Ball in your home right away! Plus all the ways to use different sized disco balls, the history behind them and a disco ball shopping guide.

Disco balls have been around for quite some time (from the Disco era of the 70’s to nightclubs), but it wasn’t until more recently that they’ve moved from being party staples to home decor staples!  I’m here today to tell you why we all need disco balls in our everyday home decor!

What is a disco ball?

A disco ball is basically a round object covered in small square mirrored pieces.  When a light source is shown directly on that mirrored ball, a complex display of light reflection is created. Using hundreds or thousands of similar sized mirror facets, a disco ball is suspended from the ceiling and spins via an external motor.

In 1924 an inventor named Louis B. Woeste filed a patent for an object he called a “myriad reflector.” The US patent filing describes the device as a “sphere, yet any other geometrical form-may be substituted therefor, which is preferably hollow and has its surface covered with a multitude of mirrors.” (source)

What are fun ways use different sized Disco Balls in your home?

For about the last eight years, I have have had a stash of 8 mini disco balls… they move around from place to place in my house.

I used to display the fruit on my dining room table in a basket.  There was something about having a handful of mini disco balls nestled into my apples and oranges that made every single person who entered my house notice and LOVE it.  (You can see my fruit bowl disco ball display here.)

More recently, I moved my set of mini balls to our dining room window sill – I love the pattern they create when the sun hits them.

After seeing the reaction of people to my fruit bowl disco balls, I knew there was more than one way to incorporate them into my home.  So I started to do some top secret disco ball investigation.

I had casually been on the hunt for bigger sizes for years and when I found an inexpensive 8″ disco ball, I knew it had to be mine!  Fast forward about a year and a half later and… I upsized to a 12″ disco ball – ha, best decision ever!

What is the history of Disco Balls?

One of the first disco balls appeared in a Boston ballroom in 1897.  Soon after the 1920’s dance era, disco balls (sometimes they are referred to as mirror balls or glitter balls) were noted to be seen in a wide variety of establishments, mainly “underground” dance houses.

Since then disco balls can be found in many different locations including: dance clubs, weddings, skating rinks, home decor, and more. This more than 100 year old trend with mirrors and light is back on the rise.

My disco ball is 8" in diameter and although it is a fairly frivolous purchase, it is one that has brought straight magic to our home!  Each day, our entire family sits on the sofa and takes note where the sunshine is and how close it is to hitting the disco ball.  (Note, now I have the 8" one in our dining room and the 12" disco ball in the living room - you can never have TOO MANY disco balls!)

And I still keep my stash of mini disco balls on a rotating basis in our home!

When the light hits the disco balls, we all just stop immediately in awe... and then maybe have a dance party.  That is the power of a disco ball, small or big.  Mini | 8" Disco Ball | 12" Disco Ball

Here is a few pictures of the disco light shimmer in different parts of our living room!

And after doing quite an excitable Instagram Story about how much joy and magic having disco balls have in our home, the ever wise MJ of Good in Store wrote me and said "Never apologize for enthusiasm... We all need more joy."  Well said, friend.  Well said.

MY Home --> Want to check out my each room in my home?
I have shared inspiration, tips and inexpensive ways to make your home YOU.

Want to shop this completed room?

4 thoughts on “Disco Balls in our home decor”